Today, August 24, 2013, the Spokane Fire Department responded at approximately 1:22 PM to 2423 E. Dalke on a reported structure fire. The first crew on-scene reported smoke showing from a 2 story wood-framed structure. Further investigation found a fire on the kitchen stove in the basement apartment with fire extending up the interior wall on the east side of the structure and into the ceiling joist of the basement unit. Fire fighters aggressively attacked the fire from the interior and exterior with additional fire crews completing search and rescue, ventilation and salvage and overhaul. The fire was brought under control within 30 minutes and there were no reported injuries to civilians or firefighters. Four engine companies, two ladder trucks a heavy recue truck and 2 Battalion chiefs totaling 24 firefighters responded to this fire. Fire crews were on scene for approximately 2 hours. The Spokane Chapter of the American Red Cross is taking care of the occupants of the basement apartment.

Cause:
The cause of the fire is under investigation by the SFD Special Investigation Unit.

Damage:
Fire damage was confined to the kitchen in the basement apartment and the exterior wall on the east side of the home with smoke damage throughout the structure.

Other Agencies Responding:
Avista and Spokane Chapter of the American Red Cross 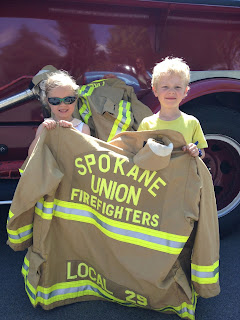 If you had your picture taken with our old fire engine  at the Local 29 Free Swim Day, you  can find your picture, here.
Posted by Bill Foss at 8:20 AM No comments: