NARRATIVE: On Friday February 29, 2008 at 1:31 PM an SFD Pumper-Ladder 13 was dispatched to check on a good samaritan report of smoke that appeared to be coming from a vent at a home in the 4200 block of Washington. After the dispatch, Spokane Police Officers that we in the area arrived and reported a two story home with fire showing on both the first and second floors. The officers also reported that they were not sure if anyone was inside and they had attempted to make entry. The officers were prevented from doing so by security measures (bars on windows and doors) placed by the home owner.

The alarm was upgraded to a full-response and added 4 Engines, 1 Heavy Rescue, one Senior Ladder under the direction of Battalion Chiefs Inman and Cornelius. When the first company officer arrived, she reported a two story house with heavy smoke and fire showing. The home was an older "balloon frame" constructed home which included a full basement. First, second and third-in companies established a water supply and forced entry into the north and west sides of the home in attempts to search for victims and attempt to extinguish the quickly moving fire. The truck company performed vertical ventilation over the fire which had already extended into the attack and void spaces on the second floor. A two-person team from Engine 3 was nearly trapped in the basement during the attack and made it out as the basement flashed over. At that point as the incident commander was confirming all personnel were accounted for, a second alarm was struck to assist the companies operating at the fire.

Information was received (and confirmed) by the incident commander that the two occupants of the house were outside and accounted for. The strategy of the incident was changed to 'defensive' and the arriving second alarm companies deployed master streams from Ladder Companies and from the ground to confine the fire to the residence of origin.

Despite the difficulties with access and rapid fire growth prior to the SFD's arrival, the fire was contained. Both company members on Engine 3 were seen by paramedics, but not transported. They are still at work, and at time of this release are on the second structure fire at 1528 West Alice.


PROBABLE CAUSE: The cause is under investigation by the SIU.
DAMAGE EXTENT: The home is a complete loss. Two occupants are being assisted by the Spokane Fire Department CARES Team and Red Cross.
DOLLAR LOSS:
FIREFIGHTER RESPONSE: 35
MUTUAL AID: None Given

END OF RELEASE
Posted by Bill Foss at 7:49 AM No comments:

Happy Birthday Local 29! What have you ever done for us?!?!

This from Dan Renner, and of course, Monty Python and the JPF (not to be confused with the PFJ).

See you at the party tonight!
Posted by Bill Foss at 10:00 AM No comments: 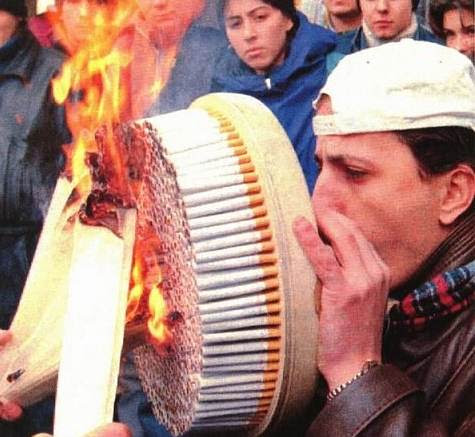 It has been nice - going on calls into what were once smoky bars.

But, I have to admit I voted against banning smoking in bars. I thought, and I still do think, that it was an unnecessary government intrusion into the lives of those who frequent bars.

Looks like the folks in Minneapolis have found a way around the law. I don't know if Washington's law is the same, but if it is, don't be surprised to go to the Rainbow Tavern on an assault and find a very smoky rendition of Hamlet taking place.

NARRATIVE: On the afternoon of February 24, 2008 at 5:01 pm the City of Spokane Fire Department responded to 3724 South Tekoa for a reported fire in the kitchen ceiling. The first apparatus on scene reported light smoke showing from the roof. Upon further investigation fire was discovered in the ceiling above the kitchen. Crews quickly removed the ceiling and extinguished the fire. This fire was confined to the underside of the roof and insulation above the ceiling. The fire was knocked down with in minutes of the fire departments arrival. The crews checked for extensions and completed overhaul in about an hour and a half. Damage was confined to the kitchen ceiling and light smoke throughout the main floor. The cause of the fire appears to be an over heated recessed light above the kitchen sink. There were no injuries to report

PROBABLE CAUSE: Over heated recessed light
DAMAGE EXTENT: Ceiling above the kitchen. Light smoke throughout the main floor
DOLLAR LOSS: 7000.00
FIREFIGHTER RESPONSE: 19
MUTUAL AID: None Given

END OF RELEASE
Posted by Bill Foss at 8:21 AM No comments: