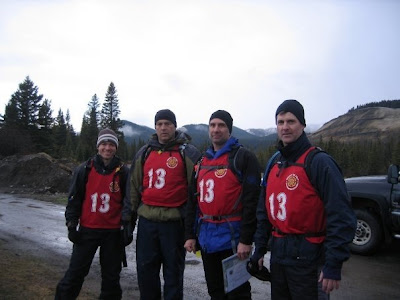 For those of you who have been reading the facebook entries about the "Wherethefugawi" team you already know what a tough race this was! For those who don't, you'll have to hear it firsthand from Jason, Jeff B., Doug or Jeff W. They were one of only six teams that actually finished the race. It looks like a lot of work and courage went into this.
Posted by Bill Foss at 7:44 AM No comments:

NARRATIVE: On Wednesday May 13, 2009 at 12:25 PM, 6 Companies of Spokane Firefighters, 4 Engines, 1 Senior Ladder and 1 Pumper-Ladder under the direction of Battalion Chiefs Sabo and Cornelius responded to a reported apartment fire at 5111 South Regal on the City's South Hill. A citizen reported what appeared to be a deck on fire on the second floor of a two-story apartment building with ten units. While the first-alarm assignment was enroute, the first due Engine reported a heavy column of smoke showing and requested a second alarm.

The closest fire company arrived on the scene within seven-minutes and immediately established a water supply and stretched hose lines to attack the rapidly progressing fire which had already extended into adjoining units and the attic. Ladder 4 arrived five minutes after the first companies and quickly laddered the apartment building's roof and placed a ventilation trench cut at the building's fire wall to prevent additional extension into multiple other adjacent units. Additional companies from the second alarm (3-Engines, Heavy Rescue, CARES Team and multiple Chief Officers) were utilized to; simultaneously attack the fire from multiple areas, search for victims, ventilate and protect means of egress. The SFD's CARES Team was specifically utilized to manage the reunification of arriving children that had their homes affected by the fire from school busses with their families. The members also coordinated with the Red Cross in arranging temporary accommodations as well as assisting the citizens with coping with the trauma of losing their homes.

Due to the complexity of the fire and its continued escalation, a third alarm was requested at 1301 which brought three additional companies from the City's farthest north Stations. At several points throughout the near three-hour incident, all of SFD's Fire Companies were committed to either the third alarm fire or many other simultaneous incidents. Off-duty Spokane Firefighters as well as mutual aid companies from Fire District 9, Spokane Valley Fire Department and Fire District 8 were utilized for City coverage.

The fire was declared under control in approximately 90 minutes with all of the assigned resourced working extremely hard. They were successful in confining the fire to approximately five units and limiting damage to one side of the building.

There were no injuries to civilians or firefighters and companies are still on the scene at the time of this release. There were a total of 17 adults and 12 children living in 9 of the 10 apartment units.


PROBABLE CAUSE: The determination of the fire's cause is under investigation by the SFD's Special Investigation Unit. A formal cause will be issued when the investigation is concluded.
DAMAGE EXTENT: Damage varies in different areas of the building, however it is significant in at least 4 units. There appears to be moderate structural damage and smoke damage throughout.
DOLLAR LOSS:
FIREFIGHTER RESPONSE: 68
MUTUAL AID: Fire District 1, Fire District 8, Fire District 9


For more information on this release, please call (509)625-7002 and/or check out the SFD Blog at www.spokanefire.blogspot.com

END OF RELEASE
Posted by Bill Foss at 6:52 PM No comments: