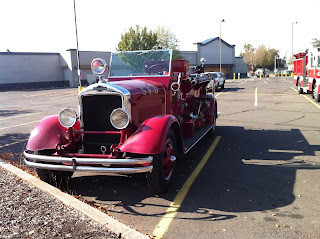 New location on Ash/Maple and NW Blvd. Seeing the closed Albertsons is kinda sad still. Bought many lunch fixins over the years there. 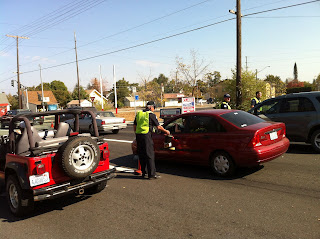 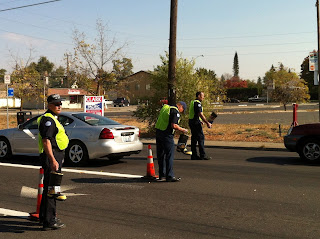 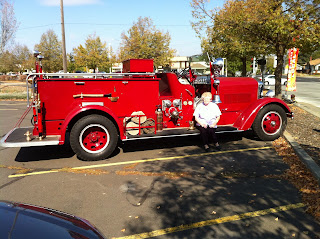 Local 29's American LaFrance was a big hit. Many people wanted their pictures taken. If you are this lady's daughter looking on the Internet for this picture, here it is! 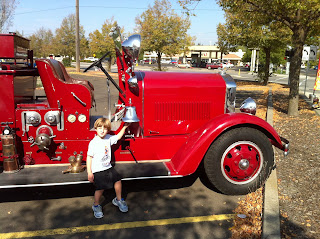 This kid could really ring the bell like he meant it. Maybe a reincarnated firefighter? 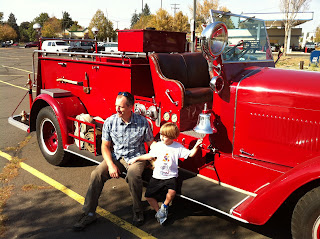 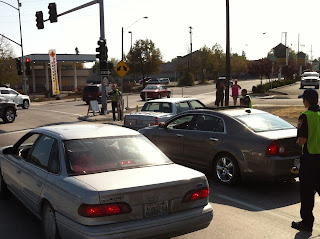 This driver was so excited to help Jerry's kids she attempted to turn S off of NW Blvd onto the R turn Lane off of Ebound NW Blvd. Quite a feat!

Thanks to all who gave to support the fight against Muscular Dystrophy!
Posted by Bill Foss at 3:05 PM No comments:

South Battalion Fire Involving a Fatality
Incident #:  2012041831
Date of Incident:  9/26/2012
Issuing Officer:  AC Schaeffer
Narrative:
On Wednesday, September 26, 2012 at 1:23 PM, eight companies of Spokane Firefighters, seven engines and one senior ladder under the direction of Battalion Chiefs Green and Fielder responded to a civilian fatality fire at 328 West 8th Avenue on Spokane's lower South Hill. Firefighters arrived quickly to discover light smoke showing from the west side of the four story apartment building. Additionally, as they were approaching the scene, they observed a civilian lying on the ground with bystanders performing CPR on the victim. The Chief arrived nearly simultaneously and ordered arriving resources (FD Paramedics) to treat the critical patient while sending other companies to supply the building's fire standpipe system and attack the fire. Companies had to use the external stairwells to evacuate occupants and used the internal stairs to deploy firefighters with their equipment. The first two fire companies reaching the fourth floor (Engine 11, Ladder 1) encountered smoke in both the stairwell and hallways; but despite the conditions, they were able to successfully locate the fire in unit 410. They successfully extinguished the fire in the apartment and limited their overhaul work to the immediate area in order to facilitate an investigation. Additional companies were used to evacuate occupants from the fourth and third floors as well as control the building's internal systems. The patient was resuscitated on scene and transported in critical condition to the closest trauma center for definitive treatment. Companies remained on scene assisting the SFD investigator and SPD Major Crimes for approximately an hour. Except for the aforementioned patient, there were no additional injuries to either civilians or to firefighters.
Cause:
Spokane Police Major Crimes and SFD's SIU are jointly investigating this incident. Preliminary information received thus far indicates that the victim (unknown adult female) was burned from a fire in the apartment and jumped from the west-facing window in unit 410. No other information is available and the next likely release will be from Police Major Crimes.
Damage:
Physical damage is minor and will not affect the remaining units on the fourth floor. Occupants will be allowed to return after the SPD investigation is completed.
# Firefighters Responding: 24
Dollar Loss: $1000

Narrative:
On Tuesday 25, 2012 at 4:03 PM, a single engine company was dispatched to a report of smoke in the area of Deaconess Hospital. As the company arrived in the area, they were met with heavy smoke showing from a three-story 160' x 50' apartment building at 725 South Lincoln. The alarm was immediately upgraded to include a reinforced assignment of 7 additional companies of Spokane Firefighters-3 Engines, 1 Heavy Rescue and 3-Senior Ladders under the direction of Battalion Chiefs Cornelius and Donahoe. As the additional companies were arriving they were assigned to rescue and evacuate the occupants in the three-story, multiple unit apartment building. A second alarm was requested at 4:12 pm and subsequent third and fourth alarms followed shortly after. Due to the area's narrow roads and parked cars, SPD was forced to tow vehicles in order to allow access by fire apparatus so they could fight the fire. All three of the City's ladder companies were utilized to search for victims and provide vertical ventilation on the roof, just above the fire. Engine companies simultaneously attacked the rapidly progressing fire from the building's interior on all three floors in an attempt to prevent its growth and limit damage. It took nearly 75 Firefighters and staff over two hours to control the incident. Firefighters were able to contain the damage to a third of the building and prevent it from spreading into adjacent single family homes. There were no injuries to either civilians or to firefighters as a result of the incident.

Cause:
The cause is under investigation and the American Red Cross assisted any displaced occupants. More information regarding this incident will be available tomorrow.

Damage:
Firefighters are remaining on scene throughout the night, protecting the homeowners belongings from additional damage during the salvage and overhaul operations. A formal damage assessment will be completed tomorrow.

125 E. Providence
Incident #:  2012041577
Date of Incident:  9/24/2012
Issuing Officer:  Joel Fielder/Battalion Chief
Narrative:
Yesterday, September 24, 2012 the Spokane Fire Department responded at approximately 8:06 PM to 125 East Providence Avenue on a reported structure fire. Fire dispatch received several calls from neighbors in the area reporting fire showing from the front of the home. The first crew on-scene reported fire at the front of a 1-story, wood framed house. The fire was extending from a window at the south (front) and the south west corner of the home with possible fire extension into the attic. Fire fighters advanced a pre-connected hose line through the front door and quickly extinguished the fire. Additional fire crews completed search and rescue, vertical ventilation and salvage and overhaul. The fire was brought under control within 10 minutes and there were no reported injuries firefighters. Ten fire companies with 27 firefighters responded to this fire and were on scene for approximately 2 hours. The home was reported to be vacant however neighbors reported transients had been living at the home.
Cause:
The cause of the fire is under investigation by the Spokane Fire Departments Special Investigation Unit.
Damage:
Fire damage was confined to the front living room with heat and smoke damage throughout the rest of the structure
# Firefighters Responding: 27
Dollar Loss: $45000

2804 E. Diamond Incident #:  2012041152  Date of Incident:  9/22/2012  Issuing Officer:  Joel Fielder/Battalion Chief Narrative: Yesterday at 10:26 AM, September 22, 2012 the Spokane Fire Department responded to 2804 E. Diamond on a reported structure fire. The first crew on-scene reported fire showing from the southeast corner of the 2-story, wood-framed apartment building. Within a matter of minutes the fire had spread from the first floor to the second floor and then into the attic via an exterior gable vent located on the south side of the structure. Fire fighters aggressively attacked the fire from the interior of the structure while additional fire crews completed vertical ventilation, search and rescue and fire overhaul. The fire was brought under control within 30 minutes and fire crews were on scene throughout the evening to complete the salvage and overhaul process. Four Engine companies, three Ladders companies, a heavy rescue truck and 2 Battalion Chiefs were on scene during the initial operations of this incident. Red Cross arrived on scene and are assisting the occupants that were displaced. The Spokane Police Department was also on scene and provided traffic control and scene security during the operational period of this incident. Cause: The cause of the fire is under investigation by the Spokane Fire Departments Special Investigation Unit. Damage: The main floor kitchen and the attic sustained significant fire damage with smoke and water damage to the rest of the structure. # Firefighters Responding: 28 End Of Release  For more information on this release please call (509) 625-7002
Posted by Bill Foss at 10:32 AM No comments: