Yoga it up for the kids! 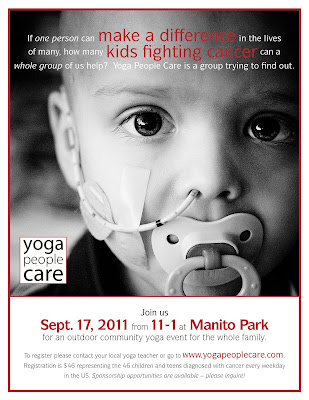 On September 17th, 11-1, at Manito Park will be a Yoga Event to raise money for kids fighting cancer. If you would like to help or would like to participate go here. Or you can contact Katie.
Posted by Bill Foss at 3:19 PM No comments:

Narrative:
On September 2nd at 16:14 hrs the City of Spokane Fire Department responded to 4008 South Lee on a report of smoke coming from the structure, E11 arrived on scene in 3 minutes from station 11 on South Perry, and reported smoke showing from the front of the home. E11 established command and assigned the next arriving company to lay a water supply. E11 advanced an attack lead to the front door and made entry the fire was just inside the door and was quickly extinguished. In coming crews were assigned to search the home and provide ventilation to remove the smoke. The fire did not extend beyond a large fish tank and the support base holding the tank. The fish tank did brake due to heat. The fire did cause extensive smoke damage throughout the home and some water damage from the broken tank. There were no injuries and the cause of the fire is under investigation. Eighteen firefighters responded on 6 fire apparatus along with 2 command officers.