South Battalion Apartment Fire
Incident #: 2013016262
Date of Incident: 04/18/2013
Issuing Officer: B.C. Mike Thompson
Narrative:This morning, April 18, 2013 The Spokane Fire Department responeded at 10:16 AM to 1110 S. Adams on a reported apartment fire. Engine 4 from the Brownes's Edition Neighborhoood Fire Station was the first crew on scene and reported smoke showing from the front door of an apartment in a residence converted to a triplex. They made a quick, aggressive attack on the fire while the Ladder crew ventilated the structure. After a search it was determined no occupants were in the structure. There were no reported injuries.
Cause:The Spokane Fire Department SIU is investigating the incident.
Damage:Damage was limited to one of three apartments.
# Firefighters Responding: 21
Dollar Loss: $ 10,000
Posted by Bill Foss at 9:59 AM No comments:

Nice article in the Spokesman-Review on Baxter baby. 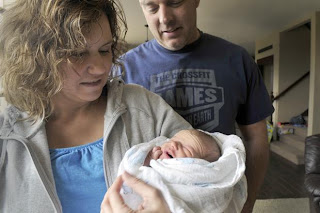 Photo from The Spokesman-Review - Jesse Tinsley

You can read the story online here.
Posted by Bill Foss at 8:11 AM No comments:

Natural gas leak ignites
Incident #: 2013015378
Date of Incident: 04/12/2013
Issuing Officer: Battalion Chief Steve Sabo
Narrative: At 0804 hrs. this morning, Friday, April 12th, the Spokane Fire Department responded 4 engines, 2 ladder trucks, 1 pumper-ladder, 1 heavy rescue and 2 Battalion Chiefs to a reported residential gas line break at 1118 E. Bridgeport Avenue. The first crew arrived on scene within 5 minutes, and reported a broken natural gas line in the back yard of the single family house. The escaping gas had ignited, creating a blowtorch effect, which quickly ignited the house and the backhoe that had been excavating in the back yard.
Fire crews confirmed that the occupants of the house, and the backhoe operator had escaped uninjured, and were accounted for. After addressing the civilian life safety concerns, the strategy to mitigate the incident turned to an aggressive fire attack on the structure and backhoe, without extinguishing the natural gas fire, while awaiting the arrival of Avista crews to stop the flow of gas. Firefighters were concerned that extinguishing the gas fire prior to shutting off the gas flow could lead to the potential for a catastrophic explosion. Strategically placed hose streams protected the house and backhoe from further flame impingement, while allowing the gas to burn off harmlessly until Avista crews were able to expose and clamp the natural gas line a safe distance away.
Meanwhile, additional fire crews attacked the structure fire from inside the house, and were able to confine the fire spread to the wall and roof area closest to the gas leak. Fire Department and Avista crews remained on scene for several hours securing the gas line and overhauling the burned portion of the house, searching for any hidden hot spots. There were no reported injuries to civilians or firefighters.  The residents were allowed to reoccupy the house after the incident.
Cause:The incident was caused by a contractor excavating in the back yard of this address, in preparation for replacing a sewer line to the house. During the excavation process the natural gas line was accidentally severed, allowing gas to free-flow. An undetermined ignition source, possibly static electricity, ignited the gas.
Damage: Fire damage was confined to several exterior walls and a section of roof, with minor interior smoke and water damage. Natural gas service to the house was stopped until the gas plumbing within the house could be inspected and any repairs made.
# Firefighters Responding: 30
Dollar Loss: $ 20,000
Other Agencies Responding:
Avista
End Of Release
For more information on this release please call (509) 625-7002
Posted by Bill Foss at 6:03 AM No comments: