Narrative:
On Wednesday August 10, 2011 at 6:23 PM, 6 Companies of Spokane Firefighters, 4 Engines, 1 Senior Ladder and 1 Heavy Rescue, under the direction of Battalion Chief Fielder, responded to a Residential Structure Fire at 2233 West Broad in Northwest Spokane. Firefighters arrived quickly to discover smoke showing from the front of the single story single-family residence. After confirming the accountability of the occupants, firefighters entered the structure using pre-connected handlines and quickly located and extinguished the fire. Additional arriving companies simultaneously provided ventilation and extinguishment of extension from the fire's originating area. The fire was completely extinguished and loss controlled in 25 minutes. Companies are still on-scene assisting family members at the time of this release. There were no civilian or firefighter injured resulting from this incident.

Cause:
The fire's cause is under investigation by the SFD's SIU.

Damage:
Structural damage was limited to the area of origin; however damage to contents from smoke is moderate. The occupants are being assisted by extended family due to the fact that the home cannot be inhabited until utilities are restored and critical repairs are completed.

Narrative:
On Wednesday August 10, 2011 at 07:41AM, Six companies of Spokane Firefighters (3 Engines, 1 Heavy Rescue and 1 Senior Ladder) under the direction of Battalion Chiefs Haworth and Sabo responded to a Structure Fire at 10 East Pine Ridge Court (Peter Square Apartments). Spokane Firefighters arrived quickly to find heavy smoke and fire showing from the first to third floors of a three-story apartment building with approximately 24 occupied units. Finding fire in multiple units throughout all three floors and the attic space, firefighters commenced swift fire attack techniques and simultaneous room-by-room searches while ladder companies were sent to the roof to vertically ventilate the fire. The first arriving Chief requested a second alarm at 07:49AM which added three engines and a Senior Ladder to the incident. A/C Schaeffer issued a third alarm at 08:03AM adding three additional Engines, two AMR Ambulances with an AMR Supervisor, Fire District 4's Rehab Vehicle and off-duty SFD Command Staff to fill incident management roles. He subsequently added an additional two Engines and the Department's Physician Director to the incident to assist with Firefighter Rehab and medical surveillance efforts. At one point early in the incident (0809AM), the IC ordered an "abandon the building" alert via the radio to all companies due to rapidly changing fire dynamics and collapse concerns. After a personnel were accounted for and tactics were modified, the strategy transitioned to an offensive attack and personnel re-engaged. The well coordinated effort confined the flames to one building and completely extinguished the blaze after multiple hours of intense activity. Thankfully, there were no injuries to any residents, citizens near the fire or firefighters.

Cause:
The Fire is under investigation by the Fire Department's SIU.

Damage:
Though loss from the fire was limited predominately to the north-most building, a total of nine apartment units and some adjacent area received intense damage. An estimated total of 45 persons living in the affected residential apartment units were referred to the American Red Cross for help and potential interim placement assistance. 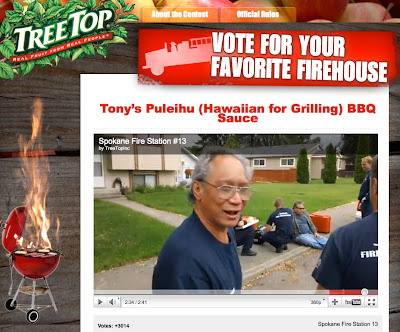 People’s Choice Winner and Recipient of a $1,000 Donation: Yakima County Fire District 6 and its recipe for Gleed’s Favorite Goop

If you haven't seen the video, here it is.

Hope all are having an awesome summer!

The annual MDA Lockup is Aug 18th this year at the Davenport Hotel and, as usual, MDA would love to have our help driving the prisoners from their apprehension back to their parole destinations. Any help they can get for the day is greatly appreciated and plenty of fun. We had several SFD folks volunteer last year and would love to see more out there this year.