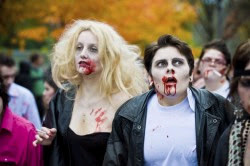 The CDC has done a great job in getting people to prepare for disasters by framing these preparations for floods, earthquakes, tornadoes, etc. in terms of a zombie outbreak. Enjoy!
Posted by Bill Foss at 8:33 AM No comments:

Narrative:
On Tuesday May 17, 2011 at 6:04 AM, 8 Companies of Spokane Firefighters, 5 Engines, 2 Senior Ladders and 1 Heavy Rescue under the direction of Battalion Chiefs Brown and Fielder responded to a commercial structure fire at 918 North Division "U-Save Cleaners." Firefighters arrived within 5-minutes and found a long strip mall with smoke showing from a middle unit (U-Save Cleaners). Firefighters met an employee which explained that she had discharged a fire extinguisher to the ceiling after seeing flames. Initial companies entered the Cleaner's portion of the building to locate and extinguish the quick moving overhead fire while additional companies forced entry into adjoining units to prevent the fire from spreading to other businesses. SFD members skillfully protected clothing, records and equipment in the building while holding the fire to the area above U-Save Cleaners. The fire was extinguished completely in just 30 minutes. No injuries were reported.

Cause:
The cause of this early morning fire is still under investigation.

Damage:
Primary damage is limited to the U-Cleaners section of the building. Utilities have been temporarily disabled to the entire building limiting service to Supercuts and Hollywood Video.

Posted by SFD Public Information at 7:43 AM 0 comments

Narrative:
On Friday May 13, 2011 at 2:32 PM, 8 Companies of Spokane Firefighters, 2 Senior Ladders, 5 Engines, 1 Heavy Rescue under the direction of Battalion Chiefs Cornelius and Jones, responded to a building fire at 229 West Second Avenue in downtown Spokane. While enroute to the incident, companies were notified that civilians may be trapped and one victim was reportedly ".on fire in the hallway of the first floor..." The first companies arrived within three-minutes and confirmed that smoke was showing from the front and rear of the three-story apartment building. The first due Engine and Ladder went to work immediately on arrival and secured water supply and stretched a hoseline in attempt to control the fire's progress and protect the egress of civilians from the upper floors. Simultaneously the Ladder Company searched the area of the fire unit for savable civilians. A male victim was located and removed from the hallway of floor 1 to the exterior where he was immediately treated by awaiting SFD Paramedics. All companies assigned on the alarm were immediately dedicated to searching the building while trying to suppress the fire's progress when they arrived. Decisive action by first arriving company officers allowed a successful search of the entire building which resulted in a confirmation that all 25 occupants were evacuated and accounted for. The fire was declared under control in less than 30-minutes and no other injuries were reported.

Cause:
The cause of the fire is under investigation by the Fire Department's Special Investigation Unit.

Damage:
Damage was limited to the first-floor unit of the fire's origin. The building was protected with a fire alarm system AND a sprinkler system. Both systems worked appropriately. The smoke detectors and fire alarm alerted all of the building's residents of the emergency and allowed for an early and controlled egress. The closest sprinkler head to the fire was activated and successfully kept the fire confined to the area of origin until firefighters could stretch hoselines to the seat of the fire and extinguish it completely. The building's safety systems have been restored and Fire Marshal Lisa Jones has allowed occupancy for the building with exception of the unit that received damage from fire. The victim is an adult male suffering from critical 3rd degree burns over 60% of his body plus significant airway burns. He was initially transported to Sacred Heart and has just been transferred to Harborview in Seattle.