NARRATIVE: On Thursday April 16, 2009 at 7:32 AM, 6 Companies of Spokane Firefighters, 3 Engines, 1 Senior Ladder, 1 Pumper-Ladder and 1 Heavy Rescue under the direction of Battalion Chiefs Fielder and Kirsch responded to a reported residence fire at 2317 West Dean Avenue in the City's West Central Neighborhood. A resident on the second floor of a two-story home contacted Fire dispatchers via 911 at and reported that the upstairs was full of smoke and there was a fire. She told dispatchers that she was unable to get out via the bedroom door and was going to try and make it through the smoke to the balcony. While a first-alarm assignment was being dispatch, a second 911 call was received from the son on his cell phone calling from the first floor. The son was reporting heavy smoke and a large amount of heat from the second floor and that his attempts to get to the stairs in a rescue effort for his mother were prevented due to the heat.

The neighborhood fire company, Engine 3, arrived within five-minutes and reported smoke showing from the two-story house and they notified other companies responding that there was a victim visible on the second floor. Engine 3 stretched pre-connected hose lines up to the second floor with four firefighters to attack the fire and confine it in order to protect the victim. Simultaneously, Ladder 4 arrived and placed ground Ladders to the victim and successfully rescued the 51 year-old female. Other companies arrived and backed up the initial attack crew and extinguished the fire in the adjoining areas while searching for other possible victims. The fire was controlled in just fifteen minutes with all of the assigned resourced working hard. They were successful in confining the fire to the second floor and limiting spread into the roof/attic and first floor areas of the structure.

The female resident was treated by Spokane Fire Department Paramedics and subsequently transported by AMR to Deaconess urgently. At last report the victim was in stable condition. Spokane Firefighters also were able to rescue the family's pet dog which is doing fine.

The outcome of this incident reinforces the importance of Fire Department staffing, adequate training and commitment to sustaining and improving the level of service. In a Fire/EMS deployment system, time is of the essence; and the life saved today is a perfect example of the components of the system coming together for a successful outcome.


PROBABLE CAUSE: The cause of the fire is still under investigation by the Fire Department's SIU. The likely cause appears to be improperly discarded smoking materials. A formal cause will be issued when the investigation is concluded.
DAMAGE EXTENT: Damage to the second floor contents are significant.
DOLLAR LOSS: 40000
Posted by Bill Foss at 10:27 AM No comments:

We are gearing up to host our SFD Bloomsday water station.. 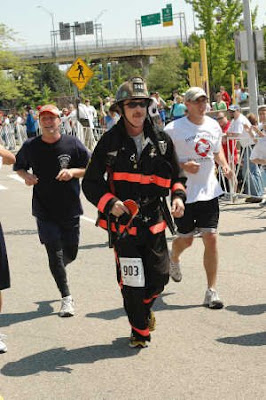 your help is needed to make this a successful year

I need someone willing to bring down a spare engine


Bloomsday is looking up to be a record breaking year with applicants up 28% as of our last update. Spokane Firefighters have sponsored the 4th water/aid station along the Bloomsday course about the last 17 years, it is one of the few events we have to get out and support a great community event - somewhere between 40-50k participants run, jog, or walk the course. While many participants travel in from out of town the vast majority are Spokane area residents. We have a couple of sponsors this year: Wake up call coffee and Mike's Old Fashioned donuts have graciously donated our morning treats. Spouses and kids are encouraged to come help out. T-shirts are provided and SFD members receive a 1/4 point. The event can last up to about 2pm by the time we are cleaned up and gone but there is not a specific time commitment or expectation, come on down and go when you gotta go. Please bring a snow shovel (I know you haven't put them away yet) and leaf rake if you got one. Give me a call with questions.