Narrative:
On Saturday, August 27, at 12:44 AM, the Spokane Fire Department responded 4 Engines, 1 Ladder, 1 Heavy Rescue, and 2 Battalion Chiefs to a reported garage fire at 5612 N Madison. SE13, which is located in the North Hill Neighborhood, arrived within 4 minutes and reported a single car garage which was fully involved with fire. SE13 advanced a preconnected hose line off their apparatus and attacked the fire, which was threatening 2 nearby structures. As additional companies arrived on-scene they advanced a second hose to assist with fire attack and structure protection and connected a water supply hose to a nearby hydrant. The quick attack diminished the fire immediately and it took crews another 2 hours to ensure the fire was completely extinguished. One occupant of this address was evaluated for smoke inhalation but was not transported. There were no other injuries to civilians or firefighters.

Cause:
The cause is under investigation by the Spokane Fire Department SIU.

Damage:
The garage is a total loss and there is heat damage to the vinyl siding on the rear of the house located at 5612 N Madison. 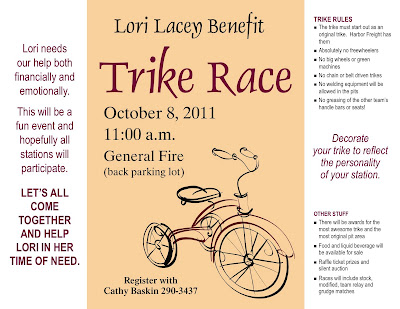 Narrative:
On Thursday August 25th, 2011, at 03:20 AM, 4 engine companies, 1 dedicated ladder and 1 heavy rescue under the direction of Battalion Chief's Donahoe and Brown responded to a reported Garage Fire at 807 E. 39th. The first arriving engine company reported a fully involved detached garage with fire impinging on a fence, a nearby vehicle and a power pole with power lines on the ground. Crews quickly knocked down the fire and protected exposures. Avista was called to the scene to disconnect the downed power lines. Crews remained on scene for over 2 hours overhauling the garage which was a complete loss. There were no injuries to Civilians or Fire Fighters.

Cause:
The cause of the fire is being investigated by the S.F.D. Special Investigation unit.

Damage:
The Detached Garage and its contents are a complete loss. There is also fire exposure damage to a fence, a vehicle and a power pole.

Narrative:
On Wednesday August 24, 2011 2:35PM, 6 Companies of Spokane Firefighters, 1 Senior Ladder, 4 Engines and 1 Heavy Rescue under the direction of Battalion Chiefs Donahoe and Fielder, responded to a residence fire at 1229 West Dalke. A Battalion Chief returning from the previous incident arrived quickly to find smoke showing from the rear and eves of the single-story, single family residence. Finding a working fire in the rear of the house, companies made entry through the front and protected the home from receiving additional smoke and heat damage by pushing the fire out the back. Companies were able to extinguish the fire quickly and successfully limited property loss primarily to the rear of the home. There were no injuries reported from either residents or firefighters.

Cause:
The cause is under investigation by the SIU.

Damage:
Damage is primarily limited to the rear of the home and fairly extensive. The two occupants are being assisted by family members.

Narrative:
On Wednesday August 24, 2011 12:07PM, 7 Companies of Spokane Firefighters, 1 Senior Ladder, 5 Engines and 1 Heavy Rescue under the direction of Battalion Chiefs Brown and Fielder, responded to an Apartment Fire at 2807 East Boone Avenue. Spokane Firefighters arrived quickly to find smoke showing from a third floor unit of a three-story apartment building. The building contained 15 apartment units total, of which 13 were occupied. The first arriving Chief requested an upgrade to a working fire which added another senior Ladder, additional engine and staff from the Training Division. Later, an additional AMR ambulance and command staff were added to the incident to assist with planning and the on-site rehab of firefighters due to the extreme heat. Finding fire in one inhabited unit and the attic space, firefighters commenced swift salvage operations to protect personal property within the structure and made judicious use of firefighting hose streams. Both Senior Ladders immediately laddered the roof and ventilated above the apartment involved in fire. The well coordinated effort of firefighters confined flames to the building's common attic, extinguishing the blaze in just 2 hours. There were no injuries reported from either residents or firefighters.

Cause:
The loss from the fire was limited to a total of two apartment units. American Red Cross is assisting the residents with interim placement assistance.

Damage:
The cause of the fire is under investigation.

Family of 6 barely makes their way out of house fire

Narrative:
On Wednesday August 24th, 2011 at 1:29 A.M. the Spokane Fire Department sent 4 engine companies, a ladder company, a rescue unit and 2 battalion chiefs to a report of a house on fire at 2430 E. Marshall. Engine 7 from their neighborhood station at 1st and Magnolia and Engine 8 from their neighborhood station at Mission and Rebecca arrived together on scene and found a single family dwelling that was filling with smoke rapidly towards the back of the house. They were quickly joined by Ladder 2, Engine 2, Engine 15 and Rescue 1 and discovered a fast spreading kitchen fire that had consumed most of the kitchen and was traveling towards the sleeping areas of the house. The 6 occupants safely made their exit from the home. All occupants had been sleeping at the time of the fire and the mother reportedly woke up in time to safely escort herself and 3 of her children out of the house. The father also woke up shortly after this and rapidly grabbed his 3 year old son from an adjoining room but soon found his exit through the main door was cut off due to the heat and rapidly building smoke. He instead opened a window on the west side of the house and climbed out the window with his son in his arms and made it out to safety. Despite the family's rapid exit through smoke and heat, there were no injuries. The fire was knocked down after approximately 10 minutes but the overhaul phase of the operation took 2 hours. A fire watch company stayed at the home until daylight watching for flare ups and hot spots. A total of 18 firefighters responded on this fire. The Fire Department would like to remind the public to maintain working smoke detectors inside your homes. There were two smoke detectors found inside this dwelling however, the batteries inside the detectors, were not plugged in all the way allowing the detectors to operate normally. Had these detectors operated like they should have, the family would have been alerted much earlier to the rapidly growing fire. The fire began as a result of cooking in a frying pan and then both the mother and father accidentally falling asleep while the stove was still on. This family is extremely fortunate to have survived such a rapidly spreading fire in the middle of the night while sleeping. Just a few moments longer, and the outcome of this fire could have been very different. Please check your smoke detectors, and keep them working to help save lives.

Cause:
While frying food in a frying pan, both adults fell asleep.

Damage:
Smoke damage throughout the dwelling. Heavy fire damage to the kitchen and adjoining living areas.

Narrative:
The Spokane City Fire Dept. dispatched fire apparatus and their crews to 518 E. LaCrosse at 16:45 hrs on Tuesday, August 23rd for a reported structure fire. As the crews were responding to the address they received additional information over their radios from Fire Dispatch indicating that a 4 year old girl was unaccounted for at the scene and that her parents feared she may still be inside the home. The first arriving fire apparatus on the scene reported a single story wood/frame dwelling with heavy black smoke showing from the roof and eaves of the building and that a detached garage behind the house was fully involved with fire. Initial assignments were made by that first-in company and shortly after their arrival word was passed via Fire Dept radio that the missing little girl had been located down the street at a neighbor's home; safe and sound. A complete search of the entire building was ordered, as per Fire Dept. policy, to ensure that there was no one inside while simultaneous fire attack and ventilation efforts were undertaken. Fortunately the search found no victims in the building and the very hot and well-advanced fire was brought under control in about 30 minutes. Fire damage to the structure was considerable and much of the interior of the building had to be opened by the fire fighters to ensure that no fire was concealed in the walls and ceilings. A large portion of the roof had to be opened to allow the hot, toxic gasses to ventilate into the atmosphere. The areas of the building not damaged by the fire itself were severely damaged by the heavy smoke conditions present. There were no reported injuries to any of the 26 fire fighters who responded to this afternoon blaze or to any of the tenants residing in the structure. Red Cross is assisting the family with temporary housing. Six engines, one ladder, one Heavy Rescue Truck, and three Command vehicles responded to this incident. The cause of the fire is currently under investigation by members of the Spokane Fire Dept. Special Investigation Unit. 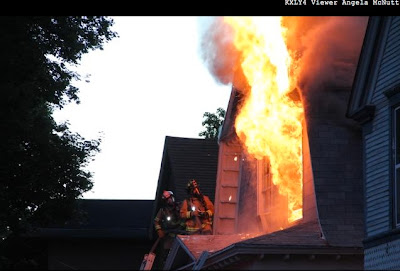 Narrative:
This evening August 21st 2011, at 19:58 hours the Spokane Fire Department dispatched 5 Engines, 3 Ladders, 1 Heavy Rescue and 2 Chief Officers to a reported fire at 1914 W. 1st Ave. Additional apparatus were sent in this first initial dispatch due to multiple 911 calls and reports of people trapped inside the structure. Engine 4 from the Browne's addition fire station, arrived a little over two minute from dispatch. Engine 4 under the direction of Lt. Dan Renner reported heavy fire showing from the second floor of a 3 story, wood frame residential with occupants stranded on the front roof. E4 assigned incoming apparatus to provide for an interior fire attack and to search for additional persons that were reported to be inside. Neighbors along with Firefighters from Engine 4 placed ladders to the front of the house to rescue stranded residents that were trapped by the developing fire. As additional fire crews arrived, they were sent into the structure to search for additional residents. The older home had been converted into roughly 9 residential units and the fire had substantial control of the second floor and the narrow stairways leading to the 3rd floor unit. Firefighters fought their way up the stairs extinguishing fire and searching for additional fire victims as they advanced. Interior crews were reporting intense heat as they made their way through the 2nd floor and narrow stairway that led to the top floor. Ladder 1's crew attempted to release some of the crippling heat on the upper floors through cutting holes in the roof. A medical group was established to provide medical care. Two residents were treated for smoke inhalation and transported to the hospital. Search crews made it to the 3rd floor, but progress was stopped due to the massive amount of heat, flames, and poor access through a very narrow stairway. Command backed the interior crews down and used a "deck gun" on the top of Engine 4 to help darken the fire from a different attack position. The deck gun was deployed for approximately and minute and then fire crews were transitioned back into the interior of the structure to continue searching and extinguish the fire. As crews gained control of the third floor, they found a male fire victim that had succumbed to the fire. The fire cause is still under investigation at this time. Fire investigators will continue with their investigation on Monday. Red Cross is assisting approximately 10 adults that have been displaced by the fire. A total of 35 firefighters and 6 chief officers responded to this incident.

Cause:
Cause is still under investigation.

Posted by SFD Public Information at 7:00 AM