NARRATIVE: Early this morning, December 27, 2009, at 0351 hours, the Spokane Fire Department dispatched a total of 8 fire apparatus and 2 chief officers to a reported structure fire located at 4111 E. 8th Ave.

Engine 14 responding from Fire Station 14, located at 17th and Ray, was the first apparatus to arrive. Lieutenant Jeff Martin reported that he had a large home with heavy fire involvement across the front porch and the west side of the home. After confirming that all occupants were out of the burning home, he quickly made assignments for the other responding fire companies while he and his crew made an immediate attack on the upper floor fire.

Incoming fire companies established a water supply and extended additional hose lines into the home to extinguish the fire. Roof ventilation was performed to assist firefighters working inside the burning structure. The main body of fire was knocked down in a short time. Initial crews were on the scene a total of 3 hours making sure the fire was out. Three fresh companies from the oncoming shift worked an additional 3 hours removing debris during overhaul operations.

Cold winter weather combined with difficult access created a challenge for on scene Firefighters. One Firefighter sustained minor injuries after falling on ice.
Approximately a third of the home sustained significant fire and smoke damage. 4 vehicles that were parked in the driveway were also damaged by the intense radiant heat.

PROBABLE CAUSE: Although the cause of the fire has not been determined as this time, wood stove ashes placed to close to combustibles is one potential cause that still is being looked at.

END OF RELEASE
Posted by Bill Foss at 7:28 AM 4 comments:

NARRATIVE: At 4:04 am Dec. 27, 2009 the Spokane Fire Department in Spokane, WA responded to a report of a front porch on fire at 4111 E. 8th Ave on the south hill. Prior to the Fire Departments arrival a Spokane Police Officer reported the house fully involved. The first crews on scene found significant fire in the front of the house and in the living room area. Because the front porch had been severely damaged attack lines had to be pulled to the rear of the house to begin an interior fire attack using 1 ¾" hose lines. The first crews reported that everyone was out of the house. The fire was upgraded to a working fire and an additional Engine and Ladder above the working fire response were requested. A total of 7 Engines, 2 Ladders, 1 Pumper Ladder, 1 Rescue Unit, 2 Battalion Chiefs and an investigator responded with total of 38 Firefighters leaving only 6 fire apparatus to cover the City. A knock down of the main fire occurred rather quickly but the fire had gotten into the structure and attic so a total extinguishment will be slow and tedious as hidden fire is searched out and extinguished. There were no injuries reported of civilians or Firefighters. The house has significant damage and is under investigation by a Fire Investigator from the Departments Special Investigation Unit. Red Cross is assisting the residents and Spokanimal was called for to assist their dog living in the backyard. AVISTA responded to cut electrical power to the structure and to lock off the gas meter which had been turned off.

END OF RELEASE
Posted by Bill Foss at 9:24 AM No comments: 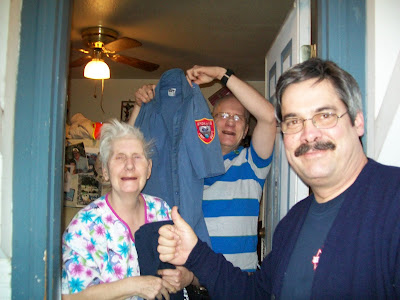 "Being this is my last day on the SFD, I thought I would spread a little Christmas to some of our less fortunate folks. This family stated 'This is the best thing we ever got for Christmas.'"