South Battalion Structure Fire
Incident #:  2012035337
Date of Incident:  8/17/2012
Issuing Officer:  B.C. Mike Thompson
Narrative:
On Friday, August 17, 2012 at 5:47 pm, 7 companies of Spokane Firefighters, 2 Senior Ladders, 4 Engines, and 1 Heavy Rescue, responded to a Structure Fire at the corner of Pacific street and Government Way . Spokane Firefighters from the Brown's Addition neighborhood Fire Station (Station 4) arrived within 4-minutes to find smoke showing from the second floor of a vacant two story structure. Firefighters completed a quick search of the structure as the first arriving Engine Companies attacked the fire and Ladder Companies prepared the roof for ventilation. The well coordinated effort of firefighters extinguished the fire within 1 hour. No injuries were reported.
Cause:
The cause is under investigation by the Fire Deparment's SIU.
Damage:
The Fire Damage was limited to the room of origin and smoke damage was throughout the second floor..
# Firefighters Responding: 22
Dollar Loss: $10,000
End Of Release
For more information on this release please call (509) 625-7002
Posted by Bill Foss at 5:16 AM No comments:

Register now for the Tunnel to Towers Run (or walk). 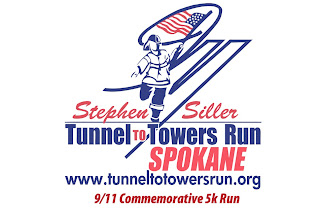 I am sending you this email to let you all know about a fundraising event for our Local 29 Benevolent Fund.  It's called the Stephen Siller Tunnel to Towers Run.  This is a 9/11 commemorative 5k run or walk going to be held in Spokane's downtown Riverfront Park on Saturday, September 22nd, at 9 AM.  Half of the registration dollars for this race come directly back to our own Benevolent Fund.  I've attached the advertising flyer to this email.

To register for this event, please go to www.tunneltotowersrun.org and click on "911 Run Near You" to find Spokane's registration page.  The event is $25 online and $30 on race day.  A complimentary t-shirt will be available for those who pre-register.

Similar to the 9/11 Memorial Stairclimb we held last year, this event IS NOT A RACE.  You can run it, walk it, and even wear your bunker gear if you like.  There is no clock or timekeeping device.  Just come out and show your support!  Stephen Siller Tunnel to Towers Runs are held all over the United States and even in London and Guam.

There will also be a need for "course marshals" to direct runner/walkers at certain turns to make sure no one gets lost. If you or one of your family or friends are interested in volunteering please contact Amy Black, event director, at (608) 658 - 4582 or email Tunnel2TowersSpokane@gmail.com
See you there!

WHO WAS STEPHEN SILLER?


By the time Stephen Siller was 10 years old, he had already lost both parents.  Although he went through a period of struggle, because of the love of his siblings and the values instilled in him by his parents, he grew up to be an extraordinary individual.  More than most, he knew that time was precious and accomplished much in his 34 years.

On September 11th, firefighter Stephen Siller had just gotten off the late shift at Squad 1, Park Slope, Brooklyn.  He was on his way to play golf with his brothers on that bright clear day when his scanner told of the first plane hitting the Twin Towers.  When he heard the news, he called his wife Sally to tell her he would be late because he had to help those in need.  He returned to Squad 1 to get his gear, then took his final heroic steps to the World Trade Center.  When Stephen drove his truck  to the Brooklyn Battery Tunnel, it was already closed to traffic .  With sixty pounds of gear strapped to his back, he ran through the Tunnel, hoping  to meet up with his own company, Squad 1.

Stephen was first and foremost a loving husband and father to five children.  He was also a dedicated fireman, devoted brother, loyal friend and committed neighbor.  His life brought great  light to those around him.

Stephen’s brother Russell wrote these words for Stephen’s Memorial which best expresses the effect of his life on all who knew him. “Like the comet Halle-Bopp that streaked across the sky a few years ago, Stephen’s light startled us all.  When we thought it could not get any brighter, it got brighter still.  Just when we were enjoying it so much, for it was so unexpected, so breathtaking, it shot across the sky and went well beyond us all, deeper into the mind of God.”

Stephen’s life and his heroic death serve as reminder to us all to live life to the fullest and to spend our time hear on earth doing good - this is his legacy.

Family friend, Jay Price, shared thoughts on Stephen’s lasting legacy when he wrote, “Every momentous event, even a tragedy, has its symbolic figures.  September 11th was no different; it just had a few more of them.  Rudy Giuliani, Father Mychal Judge, the four guys on United Flight 93…a hundred more…a thousand.  None bigger than Stephen Siller, whose stature only grows with time as New Yorkers and people from around the world follow his footsteps.”
Posted by Bill Foss at 2:27 PM No comments:

Billboards are up around town.

Because of the hot and dry conditions, specified outdoor recreational fires, including campfires, have been restricted in the City of Spokane effective today, Aug. 14, by order of the Spokane City Fire Marshal.  The restriction will continue until further notice; such restrictions are subject to change depending on conditions.

Here are other requirements for outdoor fires:

Failure to comply with the burning restrictions could have serious consequences.  A person who fails to take immediate action to extinguish or otherwise discontinue unauthorized burning when ordered to do so is guilty of a misdemeanor.  That person can face a fine of up to $1,000 and/or up to 90 days in jail.