Luckily, for most of us it's too late to register. Phew. However, you can still participate by making a donation to a team or one of your buddies. 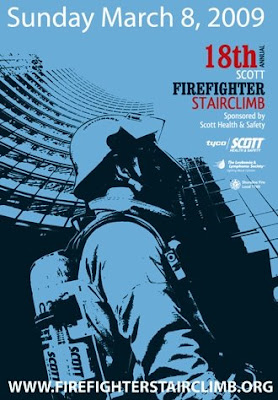 Click here to sponsor an individual or a team.
Posted by Bill Foss at 12:22 PM No comments:

NARRATIVE: At 6:50 PM this evening, Monday, February 02, 2009, the Spokane Fire Department responded to a reported shed fire at 1206 S. "F" Street. Upon arrival the first fire crews reported a detached 12'X18' storage building heavily involved in fire. Siding on the main house at that address, which was less than 20' away from the storage building, was smoking and near ignition from the radiant heat. Fire crews applied water to the house and checked the inside for any fire extension as other crews simultaneously attacked and extinguished the fire in the storage building. During their investigation of the house one of the crews located the occupant, who reported he had received burns from the fire. The victim, an adult male, was working on his motorcycle in the storage building when gasoline vapors were ignited by a kerosene heater used to heat the building. The victim sustained second degree burns to both hands and first degree burns to his face prior to escaping the burning building. He was treated at the scene by Spokane Fire Department paramedics and transported by ambulance to Deaconess Medical Center. His injuries are not considered life threatening.

PROBABLE CAUSE: As was noted, the cause of the fire was accidental ignition of gasoline vapors inside the storage building.
DAMAGE EXTENT: Damage was confined to a total loss of the storage building and its contents, as well as minor damage to trim and siding on the house at this address.
DOLLAR LOSS: 40000
FIREFIGHTER RESPONSE: 21
MUTUAL AID: None Given

NARRATIVE: On Tuesday February 3, the Spokane Fire Department responded at approximately 7:52 AM to 1607 West Nora on a reported structure fire. The first crew on-scene reported light smoke coming from the back of a 1-1/2-story, wood framed house. An aggressive interior attack by on scene fire crews confined the majority of the fire to a bedroom in the basement with smoke damage through out the structure. The fire was brought under control within 20 minutes and there were no reported injuries to firefighters or civilians

PROBABLE CAUSE: The cause of the fire is under investigation by Spokane Fire Investigator Jason Reser and he can be contacted at 625-7051.
DAMAGE EXTENT: Fire damage was confined to the basement with smoke damage through out the residence
DOLLAR LOSS:
FIREFIGHTER RESPONSE: 24
MUTUAL AID: None Given

END OF RELEASE
Posted by Bill Foss at 12:36 PM No comments:

CARTNE Removed (for a while).

For those of you who never got the chance to see CARTNE, I apologize. It has been removed from YouTube. There was nothing derogatory about the SFD, the city, Local 29 or anything objectionable in this video whatsoever. So what made one person complain? And why do we all bend to the whim of a single person? After his first complaint, I went through the video and took out any references to SFD or Spokane, but that wasn't good enough. It's not about the video.

This person has a problem with me. I could post anything and this fellow would have a problem with it. If it is who I think it is, I have invited him to discuss his problem with me, but the person that he is, he has declined. Whomever he is, he would rather work behind the scenes to destroy what others create than to do anything productive himself. It is an affront to him that anyone would care enough to actually do some work on their day off to give something back to others. Oh well, having to live inside his skin is punishment enough for him.

This person is not in the upper echelons of our department. He is not a chief.

He is just a sad little man (whomever he is). CARTNE will be back. It's just going to take a little longer this time. But, you can't let the cowards, the sadsacks, the haters win!

Pebbles and BamBam sang it best:

EMS in the movies! The Report!

Been enjoying old westerns this winter - a lot! I think many of the themes I find in these movies resonate with me.

Anyway, here is a short clip from Lonely are the Brave starring Kirk Douglas. It's near the end, so if you don't want to know the ending of the movie, don't watch the clip!

It made me laugh. Have things changed?
Posted by Bill Foss at 6:57 AM No comments:

Dean Pearcy has put together some great videos over the past few years. Take a gander and you might see yourself in action! Here is his 2007 year in review. Looking forward to 2008's.

NARRATIVE: On January 31st, 2009 at 5:09 P.M. the Spokane Fire Department responded 7 apparatus and 2 battalion chiefs to a structure fire located at 911 W. Jackson. Firefighters discovered a well advanced fire in the basement of a home with a report that there may have been an explosion accompanying the fire. Crews used a transitional approach and first knocked down what fire they could through an available exterior basement window. At the same time, the natural gas was turned off and ladder crews began their search and ventilation duties. It was found that the occupants were not at home, however two dogs were successfully rescued and safely taken outside. Hose line crews on the inside with help from roof crews cutting holes to ventilate were able to knock down the basement fire after approximately 15 minutes and as they began to check for hidden hot spots throughout the building, they also discovered a python snake, a boa constrictor, a tortoise and a Nile monitor lizard. All were caged and unharmed but due to the special nature of this situation, arrangements for transportation for these exotic animals proved challenging but eventually Spokanimal arrived to transport the animals to a warmer and safer place. Close examination of the structure revealed that there was a concussion which disrupted a portion of the concrete foundation and walls. The fire is currently under investigation by the Spokane Fire Department Special Investigation Unit. Crews will remain at the home throughout the night and early morning hours finishing their job looking for hidden pockets of fire that could remain in the floors, walls and roof areas. There were no injuries to firefighters. The Red Cross is in contact with the family and is assisting them with their displacement.

END OF RELEASE
Posted by Bill Foss at 5:54 AM No comments: