Responding to an initial report of a car fire, the first company arrived within 7-minutes to find several vehicles and a garage well involved, with flames rapidly extending to nearby automobiles and an adjacent 2 story apartment building.

As additional personnel were summoned, firefighters established a water supply and commenced a swift and well-coordinated attack on the flames. A second alarm was requested at 10:25 primarily due to lack of access for equipment, water supply and the projection of the fire threatening nearby structures. As additional resources arrived companies were utilized to protect residential belongings in nearby apartment buildings and limit the spread of fire from the primary apartments and well-involved garage.

Due to the quick knock-down by the first alarm companies, the second alarm resources were cancelled while enroute and utilized for City coverage and handled other simultaneous incidents. No injuries were reported in this incident.

PROBABLE CAUSE: The fire's origin was isolated to a vehicle parked minutes earlier at the garage/carport location. The specific cause of the fire has yet to be determined by Spokane Fire Department's SIU.
DAMAGE EXTENT: The effort proved synergistic, with the flames extinguished in just 20 minutes. Damage was limited to multiple unoccupied vehicles, garages, and a portion of two apartments with smoke impacting two adjacent dwelling units.

NARRATIVE: On Sunday, October 31, 2010 at 3:31PM, 8 Companies of Spokane Firefighters, 5 engines, 1 Pumper-Ladder, 1 Senior Ladder and 1 Heavy Rescue under the direction of Battalion Chiefs Green and Moline responded to a Greater Alarm Structure Fire at 607 East Houston in Spokane's North Side. Firefighters responding to a report of a fire in an apartment arrived within 4-minutes from the neghborhood fire station to find heavy fire showing from the second and third story of a 70' x 100' three story apartment building. Swiftly forcing entry into multiple apartments and assisting occupants to safety, Spokane Firefighters commenced a well-coordinated search of the apartments in close proximity to the working fire on the second and third floors. A second alarm was issued a 3:40PM and subsequent third alarm at 4:01PM that brought an additional three Engines, two Senior Ladders and off-duty command staff.

Finding heavy fire in two floors and the attic/roof, arriving firefighters commenced an aggressive fire attack to protect savable property by cutting multiple ventilation holes on the roof above the fire and a defensive truck company tactic called a "trench cut." The trench cut was made ahead of the fire's route of travel in an effort to prevent lateral spread throughout the remainder of the building. Firefighters from engine companies were working on the interior of the second and third floors making judicious use of firefighting hosestreams and completely pulling the ceilings directly below the trench and stretching additional lines to key locations below the trench. The well coordinated effort of firefighters confined flames to the building's south-most areas and common attic, extinguishing the blaze in just 2-hours. There were no injuries to firefighters and one civilian was transported for smoke inhalation.

PROBABLE CAUSE: The cause is under investigation by the Fire Department's Special Investigation Unit.
DAMAGE EXTENT: The south-most areas of the building are severely damaged. Other areas received varying levels of damage. In all, there are 29 apartment units and 54 individuals residing in the building. Six units were destroyed, eleven suffered major damage, four had minor damage and eight are undamaged. The building has no power and building is posted not to occupy. The Red Cross initially opened a shelter at the Spokane Friends Church (1612 W. Dalke) and are assisting the tenants with temporary housing and assistance.
DOLLAR LOSS:
FIREFIGHTER RESPONSE: 48
MUTUAL AID: Fire District 1, Fire District 9

NARRATIVE: On Tuesday, November 02, 2010 at 12:49 A.M. the Spokane Fire Department responded to a report of a structure fire at 3008 N. Perry. Eight fire apparatus under the direction of Battalion Chiefs Jones and Brown responded to this location. This response included 4 engine companies, 1 heavy rescue, and 2 ladder trucks. Ladder 2 was the first to arrive and reported a four-plex residential structure with fire showing from the out side of the structure. One auto was fully involved that was parked next to the building was also reported by ladder 2. Responding from their neighborhood station at North Foothills Dr. and Nevada, ladder 2 assumed fire attack and quickly extinguished the fire. Other apparatus on scene were assigned to various duties such as Safety, RIT, Water Supply, Search, and Ventilation. There were no injuries to civilians or firefighters. Total of 22 firefighters responded to this fire.

PROBABLE CAUSE:
Under investigation.

DAMAGE EXTENT:
Fire was confined to the out side of the structure and one automobile

Full page ad in this morning's paper from Dino Rossi's people tells us how he feels about firefighters and our union.... 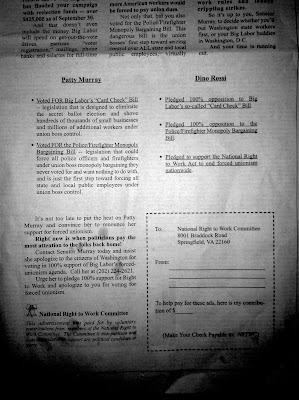 This full-page ad is from an anonymous well-funded PAC that wants to put Dino Rossi in office. You can see why from the ad. And if you need it spelled out - the reason why is YOU.

These folks who are supporting Rossi think you make too much money, have too safe of working conditions, and are underworked - all this from collective bargaining which Rossi and other Republicans would like to undo and keep others from having.

If you are a firefighter and you haven't decided who to vote for in the senate race, this ad in this morning's Spokesman-Review might give you something to think about.

Patty Murray has always been a supporter of firefighters and our union. Dino Rossi wants to take away our collective bargaining rights and all that they have done for us. And he and his friends are proud to tell you that is exactly what they intend on doing.

Good luck deciding on who to vote for.