POLL RESULTS ARE IN

How should the SFD decide who gets the new engines?

In an arbitrary or random fashion.

Crews that look the best get the best.

None of the above (email Bill Foss with your answer and he will post it).

After doing this assignment, if you need a certificate, let me know... 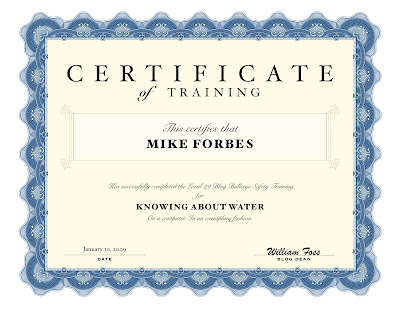 I try to get the newsletter out the day before our next union meeting. So the deadline is always about a week before the meeting. Please email me with any articles, opinions or pictures you want published.

Thanks, John
Posted by Bill Foss at 7:53 AM No comments:

NARRATIVE: The Spokane City Fire Dept. Dispatch Center received a call at 10:34 in the morning on Thursday, Jan. 29th, reporting that there was smoke coming from a house located at 1107 W. Carlisle. After gathering all pertinent information from the caller, the Dispatcher sent fire fighting crews and their apparatus responding to this address for a possible house fire. The first fire crew to arrive on scene reported heavy smoke issuing from under the eaves and coming out of the roof. That first arriving Officer made assignments to the other incoming crews by radio and then proceeded to make entry into the building in an effort to determine not only the cause of the smoke but also to determine where it was coming from. As the other responding crews arrived on scene they began to go about completing their pre-assigned tasks of search and rescue, fire attack, ventilation (both vertical and horizontal), and laddering the building. The fire posed some initial problems to the fire crews in that it was burning in the confined spaces of the building and spreading into the attic and the under-side of the roof assembly. In order to find the fire, firefighters used power saws, pike poles, axes, and other hand tools to dig this stubborn fire out from the walls and ceilings. As this "opening-up" proceeded, crews were finally able to get water on the fire and get a pretty good knock down on it. There were two adults in the home at the time of the fire that were able to escape with a pet dog, the family cat was not located but it is hoped that he used one of his nine lives and escaped successfully. The two children who live at the home were at school. There were no reports of any injuries to the tenants or to the fire fighters at the incident. Red Cross was requested to the scene to assist the family since damage to the interior of the house and to the structural members of the roof was considerable and extensive repairs will need to be completed before anyone will be allowed to live in the structure. Avista was notified and responded to pull the electrical supply to the house because many of the electrical circuits were severely damaged. The cause of the fire is currently under investigation by members of the Spokane City Fire Dept.'s Special Investigation Unit. Preliminary indications point to the fireplace and the structural support members of the building that were in direct contact with the brick and mortar of that fireplace, a fairly common construction practice in older homes of this area. Seven pieces of fire apparatus and two Command Vehicles delivered 25 fire fighters to this morning fire.

PROBABLE CAUSE: Old, dry, wooden structrural components being in direct contact with the brick and mortar of an older masonary fireplace which has been used to augment the other heating systems of the building.
DAMAGE EXTENT: The walls, ceilings, floors, and a closet that were near the chimney, which was centrally located in the house, received heavy damage. The attic and especially the under-side of the roof system sustained severe damage. Smoke damage to the contents was kept to a minimum since most of the smoke traveled upward through the attic and out the roof.
DOLLAR LOSS: 30000
FIREFIGHTER RESPONSE: 25
MUTUAL AID: None Given

END OF RELEASE
Posted by Bill Foss at 7:34 AM No comments:

NARRATIVE: On Wednesday, January 28, 2009 at 1:55PM the Spokane Fire Department dispatched a full alarm consisting of 6 fire apparatus and 2 chief officers to a reported house fire located at 3503 E. 36th Ave. The first arriving company, E14 under the direction of Lt. John Trautman arrived at the scene within 5 minutes of being dispatched.

The initial report from Lt. Trautman was that the home had fire on its rear side and that the fire had possibly entered the rear portion of the home. Engine 14s crew immediately stretched pre-connected hose lines to extinguish the fire. Simultaneously, other crews searched and verified that the home was not occupied. The main body of the fire was knocked down within 5 minutes. Crews were on the scene for a couple of hours making sure the fire was out.

Firefighters found 3 dogs inside the home and several cats. All of the animals are in good condition and have been reconnected with their owners.

There were no injuries at this incident. Damage was confined to the rear of the home and a portion of the kitchen. The cause of this fire is still under investigation, but does not appear to be suspicious at this time.


PROBABLE CAUSE: The cause is still under investigation.
DAMAGE EXTENT: Rear of home and kitchen.
DOLLAR LOSS:
FIREFIGHTER RESPONSE: 20
MUTUAL AID: None Given

END OF RELEASE
Posted by Bill Foss at 9:17 AM No comments:

There's a new icon on the sidebar that will feature pictures that you send in to me. We'll see if anybody does.

billfoss@comcast.net
Posted by Bill Foss at 3:07 PM No comments:

NARRATIVE: - This morning, the Spokane Fire Department responded at 12:53 AM to 4203 North Calispel on a reported structure fire. The first crew on-scene reported light smoke showing from the front door of a 1-story, house. Further investigation by the on scene fire crews found fire burning within a wall next to a brick fire place. The fire crews gained access to the wall and quickly extinguished the fire. Fire damage was confined to the wall only with no fire extension into the attic. The fire was brought under control within 10 minutes and there were no reported injuries to firefighters.

The two occupants of the house were asleep at the time of the fire and were alerted by the sounding of their smoke detector as the house was filling up with smoke. The Spokane Fire Department would like to take this opportunity to express the well known fact that properly working smoke detectors do save lives.


PROBABLE CAUSE: The fire was caused by combustible, structural framing members that supported the brick chimney igniting from the heat of the fire place
DAMAGE EXTENT: Fire Damage was confined to an interior wall and the brick fireplace
DOLLAR LOSS:
FIREFIGHTER RESPONSE: 22
MUTUAL AID: None Given

END OF RELEASE
Posted by Bill Foss at 7:26 AM No comments:

NARRATIVE: At 3 am January 25, 2009 the Spokane Fire Department dispatched 6 fire apparatus and 2 Battalion Chiefs to a reported house fire across the street from 4108 W. Sanson in Spokane, Washington. Engine 16 was the first fire crew on scene. They arrived very quickly as their Fire Station is less than a mile from the incident. Upon arrival Engine 16 reported the basement of a split level house at 4103 W. Sanson fully involved and upgraded the fire to a working fire requesting an additional Engine Company and a fire investigator. A rapid fire attack by Engine 16 was started and their efforts stopped the spread of the fire. The crew advanced the hose line through the house for further fire attack and extinguishing hot spots. The next apparatus on scene was Pumper Ladder 13 and they backed up Engine 16 as well as beginning a search of the house for anyone still inside. Additional crews arrived to assist with water supply from a nearby hydrant, ventilation of heat and smoke from the house and a safety backup team. The fire was quickly brought under control, no residents were still inside but 3 pets did not make it out. Two cats and a bird died in the fire. The residents were asked if they were awaken by their smoke detectors but said they were not as they did not have batteries in them. There were no injuries to civilians or Firefighters, Red Cross was called for the displaced 4 residents, Spokanimal was called for the deceased pets and AVISTA to disconnect electrical and gas services to the burned structure. 26 Firefighters responded on 4 fire Engines, 1 ladder truck, 1 pumper ladder, 1 rescue unit and 2 staff vehicles. The fire is under investigation by the Spokane Fire Department. At this time the Spokane Fire Department would like to remind the public to make sure their smoke detectors are operational and change the batteries at least twice a year. Do not count on someone smelling smoke and waking up as this is not a reliable way to alert the occupants of a home to fire.

PROBABLE CAUSE: Unknown. It is under investigation by the Spokane Fire Dept.
DAMAGE EXTENT: Extensive fire damage to the room of origin with heavy heat and smoke damage throughout the house.
DOLLAR LOSS:
FIREFIGHTER RESPONSE: 26
MUTUAL AID: None Given

END OF RELEASE
Posted by Bill Foss at 10:30 AM No comments: