He talked a lot about pending elections. Where the IAFF has been involved, we've been successful in beating back legislation and candidates who seek to scale back worker's rights.

Stated how ALEC used the 2008 Recession to turn workers against workers - channeling their anger, which should have been directed toward ALEC and their allies, against other workers.

Said that the IAFF historically made strides in benefits by saying, "Hey, we want what those guys have." Then we worked to achieve it. Now, Republicans have been successful at reversing this, getting others to say, "Hey, those guys have something we don't. Take it away from them."

Stressed that if Republicans gain Senate, that new committee heads have already stated their desire to take away what you have and destroy what we've built. That is their goal and they have said so.

If GOP wins they will take us back 100 years. 100 years ago, 10 families controlled our nation. Then there was the Workers Rights Movement and democracy. This took power away from the few wealthiest in our nation. They are going to take it back from all of us, if we let them.

The Combat Challenge seeks to encourage firefighter fitness and demonstrate the profession's rigors. Wearing "full bunker gear" and the SCOTT Air-Pak breathing apparatus, pairs of competitors race head-to-head as they simulate the physical demands of real-life firefighting by performing a linked series of five tasks including climbing the 5-story tower, hoisting, chopping, dragging hoses and rescuing a life-sized, 175 lb. dummy, or "victim" as they race against themselves, their opponent and the clock. 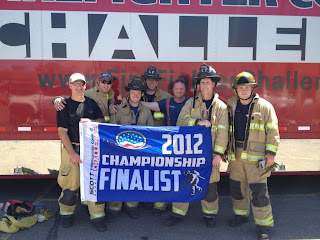 Members of the Spokane Fire Department’s team competed individually on Friday before heading into the team relay and tandem races on Saturday. The relay team consisting of Jason Keen, Jeff Baxter, Darin Neiwert, Jeremy Mulvey, and Jeff Webb excelled, finishing the course in a time of 1 minute and 48 seconds, which was good enough to earn them a spot at the 2012 World Challenge Championships in Myrtle Beach, South Carolina later this year. 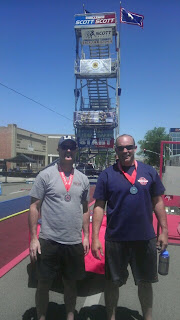 Three of Spokane’s tandem teams competed on Saturday; the tandem team of Baxter and Webb placed 2nd in the tandem relay for the over 40 category. Keen and Neiwert finished in the top 10 of the general tandem category.

“The Spokane Fire Department values physical fitness and wellness – obviously it is a necessary component of being able to complete the physical demands of our job day in and day out. A competition like the Combat Challenge is a great way to inspire individual firefighters to work out, take their health to a new level and represent our department. I couldn’t be more proud of what our team has accomplished this weekend and we are looking forward to representing Spokane at the international level this fall,” said Team Captain Darin Neiwert, who is a Lieutenant on Spokane’s Ladder 2.

Each year, the Combat Challenge attracts hundreds of firefighters from municipal fire departmentsto competitions at more than 25 locations around the world, including New Zealand, Germany, Argentina, Chile, and South Africa. ESPN provides regular coverage of Challenge events.
Posted by Bill Foss at 5:20 PM No comments: