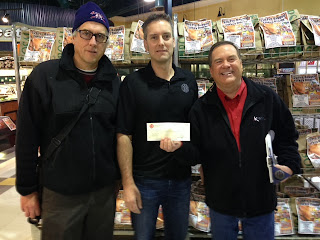 Local 29's Benevolent Fund contributed $1000 to KREM-TV's Tom's Turkey Drive this morning. If you want to contribute to this drive, here is the website. 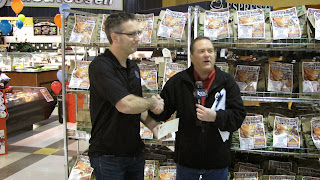 North Battalion Structure Fire
Incident #: 2013054106#
Date of Incident: 11/19/2013
Issuing Officer: Battalion Chief Bill Donahoe
Narrative:On Tuesday November 19, 2013 at 07:12 PM, 3 Engines, 1 Pumper Ladder, 1 Senior Ladder and 1 Heavy Rescue along with 2 Battalion Chiefs and the Assistant Chief responded to a reported structure fire in the West Central neighborhood. The Assistant Chief was just a few blocks away driving home when the call came in. He arrived on scene and reported a 2 story home with fire and heavy black smoke showing out of the gable vent of the roof. The fire was upgraded to a working fire with another Senior Ladder and another Engine added to the call to assist at the labor intensive incident. Unclear reports from neighbors on the scene portrayed the possibility of people still inside the home. Companies were assigned to search the home along with confining and extinguishing the fire, ventilating the roof and protecting an exposed home to the west. The completed search of the home confirmed the four adults and one child had made it out safely. The knockdown of the fire occurred within 30 minutes. Companies remained on scene until 10:00 PM overhauling the fire on the 2nd floor and attic voids. From 10:00 PM till after midnight an Engine Company remained on scene to confirm there were not any remaining hot spots. One Fire Fighter sustained a minor muscular skeletal injury by falling debris but is not seeking medical attention at this time. No injuries to the occupants or their pets were reported. The occupants are being assisted by the Red Cross for clothing and shelter needs at this time.
Cause:The cause of the fire is under investigation at this time by the Spokane Fire Department’s Special Investigation Unit.
Damage:There was major structural damage to the second floor walls and roof along with wiring damage from the fire.  Avista disconnected the gas and power to the home.The home was declared inhabitable.
# Firefighters Responding: 25
Dollar Loss: $ 70,000.00
Other Agencies Responding:
A.M.R. Ambulance, Avista and Red Cross.
End Of Release
For more information on this release please call (509) 625-7002
Posted by Bill Foss at 6:10 AM No comments:

On Sunday November 17, 2013 at 5:05 PM, 6 Companies of Spokane Firefighters, 1 Senior Ladder, 3 Engines and 1 Heavy Rescue under the direction of Battalion Chiefs Donahoe and Moline responded to a reported structure fire in Northeast Spokane. Dispatch advised the fire had been reported on the 3rd floor of an Apartment building and the Responding Chief at this time modified the response adding another Senior Ladder Company. Engine 15 from Wellesley and Crestline arrived with 6 minutes from the time of dispatch and reported a 3 story home with heavy black smoke showing out of a 3rd floor window with potential involvement to the roof voids. The incident was upgraded at this time to a working fire adding the last dedicated Ladder in the city to the incident along with an Ambulance and the on duty Fire investigator. Companies were assigned to confine and extinguish the fire, vertically ventilate the roof and complete a search for potential occupants unaccounted for. Due to the aggressive interior fire attack along with vertically opening the roof by the Firefighters on scene the fire was confined to the 3rd floor and roof voids and a knockdown was declared within 30 minutes. A complete search was conducted of the entire building with all of the 16 occupants being accounted for on the street. Unfortunately one cat did not make it out of the fire room and perished at the scene. Eight adult women and eight adult males at this time are staying at a local hotel provided by the Red Cross. The building has been determined uninhabitable by the Spokane Fire Department until fire and smoke damage along with electrical concerns and egress issues can be addressed by the building owner. Two occupants were treated for smoke inhalation on the scene but refused transport to a medical facility.

Cause:
The cause of the fire is under investigation at this time by the Spokane Fire Department’s Special Investigation Unit.


Damage:
Extensive fire and smoke damage to the 3rd floor including a complete loss of the involved occupant’s belongings. The basement, first and second floors did not sustain damage from the fire.