NARRATIVE: At 0330 this morning, Friday, December 10, 2010, the Spokane Fire Department responded to a reported house fire at 3919 S. Tekoa St. The first crew on-scene reported a heavy volume of fire visible at the rear of the single story house. Fire was also beginning to extend to the semi-detached garage. The first fire crew extended hoses to the rear of the structure and began knocking down the exterior fire. Unfortunately, fire had already extended into the attic and was burning through the roof. As other crews arrived on-scene they began the process of searching for victims, interior fire attack, roof ventilation, and opening ceilings to access the fire. The adult female occupant and her young daughter had escaped the house prior to arrival of the fire crews. As firefighting operations were in full swing, power lines to the house dropped and electrically energized the metal rain gutters, causing one firefighter to receive a shock. He reported no lasting ill effects and continued working at the scene. Due to the energized rain gutters, efforts to extinguish the fire from the roof were delayed until Avista arrived to disconnect power servicing the house. Once crews were able to return to the roof, a coordinated extinguishment effort from the roof and from the interior resulted in a successful knockdown of the attic fire. Crews remained on-scene for nearly four hours completing the extensive overhaul, which included cutting away and removal of nearly half of the roof structure.

PROBABLE CAUSE: The cause of the fire is still under investigation by the Special Investigation Unit of the Spokane Fire Department.
DAMAGE EXTENT: Damage to the structure was extensive, including removal of a large portion of the roof. There was no interior fire damage, but there was extensive water, smoke, and overhaul damage. The occupants will be unable to live at the house until extensive repairs are made.
DOLLAR LOSS: 80,000
FIREFIGHTER RESPONSE: 27
MUTUAL AID: None Given

In time for the Holidays. New Local 29 clothing items! 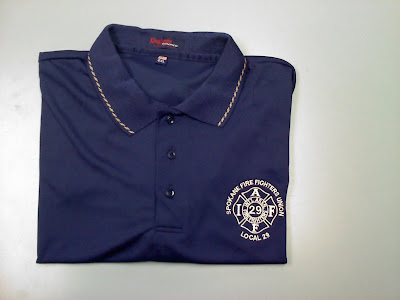 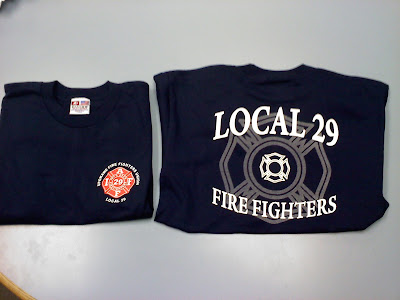 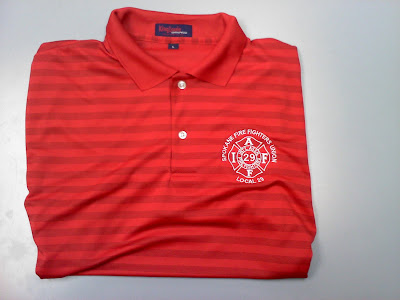 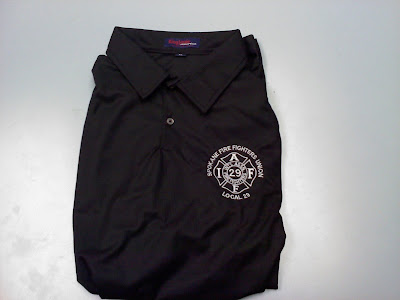 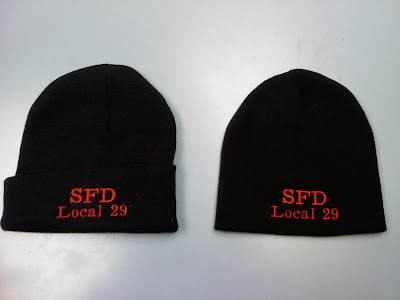 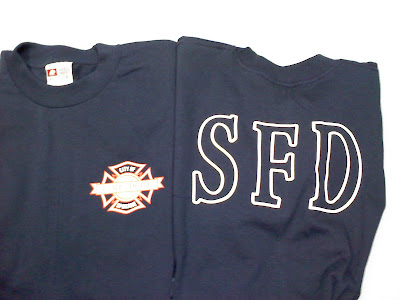 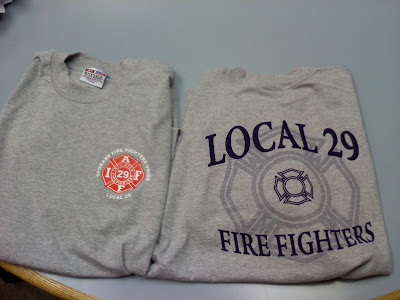 Come down to the union office to buy some new Local 29 threads, man. Call ahead to make sure someone is there first. These may be door busters but don't bust the door, buster.

Check out the hip new designs! All made in the USA, of course, so you will spread holiday cheer without the nagging "gosh, how can I be having fun when I know my shirt was made by slaves" feeling.

Deck the halls now! Bow to the Holly! Doooooooo ittttttttttttttt!!!!!
Posted by Bill Foss at 8:02 AM No comments:

NARRATIVE: On Sunday December 5, 2010 at 6:13PM, 7 Companies of Spokane Firefighters, 4 Engines, 1 Heavy Rescue and 2-Senior Ladders under the direction of Battalion Chiefs Sabo and Haworth responded to a reported apartment fire at 1906 West Pacific Avenue.

The first company arrived within 3 minutes and reported a two-story apartment with smoke and fire showing from the front of the building. Ladder Companies were utilized to gain access to the affected unit and immediately searched for victims while other companies confined the fire to the unit of origin. It took 24 Firefighters working in frozen conditions just 15 minutes to locate and knock down the fire and control the incident. Firefighters were able to contain the damage to one unit and prevent it from spreading into the adjoining unit and roof and ceiling areas.

No civilians were injured in the incident; however one firefighter was treated by on-scene Firefighter/Paramedics for a medical emergency and transported to a local hospital definitive treatment.


PROBABLE CAUSE: The cause of this incident remains under investigation.
DAMAGE EXTENT: Firefighters have remained on scene protecting the homeowners belongings from additional damage during the salvage and overhaul operations. One unit was damaged due to the fire and another which is located directly below received damage from water.
DOLLAR LOSS:
FIREFIGHTER RESPONSE: 24
MUTUAL AID: None Given

NARRATIVE: The Spokane City Fire Dept. dispatched fire fighting crews and their fire apparatus to 2015 W. Mansfield at 12:11 hrs. on Thursday, Dec. 2nd, 2010, on a reported structure fire. The first arriving fire companies, E4 and L4 from the Browne's Addition neighborhood Fire Station, reported smoke showing out of the gable vents at the front and the rear of the house. They quickly donned their Self-Contained Breathing Apparatus (SCBA) and immediately entered the building with a charged hose lead to try and locate the source of the increasing smoke. While those two fire companies went about their work inside the structure other arriving fire crews were given additional assignments that included: securing a water supply, interior search and rescue, roof ventilation, opening walls and ceilings on the second floor, shutting down the electric and gas utilities, covering furniture on both floors with protective tarps, and deploying the Rapid Intervention Team (RIT) for fire fighter safety. The source of the smoke was found to be a smoldering type fire which had been burning undetected in the attic space below the roof. The fire appeared to have been burning for quite a while in the attic since some of the structural members in the attic and under the roof had been burned half way through. In order to get at this stubborn fire the fire fighters had to cut open the ceiling and the walls of the apartment on the second floor and they had to remove much of the still smoldering insulation in the attic and dump it outside of the building. There were no reports of any injuries to the tenant of the second floor apartment or to any of the fire fighters at the scene. The tenant of the first floor apartment was away at work when the fire occurred. Red Cross was requested to the scene to assist the tenant on the first floor and her three young children with temporary lodging. The two apartments will not be able to be occupied until substantial structural and electrical repairs can be made to the upper unit. Fire damage at this building was confined to the attic space and some of the ceilings and walls of the second floor apartment. Smoke damage was limited to the top floor apartment. The first floor apartment was not damaged. Thirty one fire fighters were delivered to this fire scene by four engines, two senior ladder trucks, one pumper ladder, one heavy rescue apparatus, and three Command Vehicles. The cause of this fire is being investigated by members of the Spokane Fire Dept.'s Special Investigation Unit (SI

PROBABLE CAUSE: Currently under investigation by members of the Special Investigation Unit of the Spokane City Fire Dept.
DAMAGE EXTENT: Considerable fire damage to the second floor apartment and the attic as well as the underside of the roof.
DOLLAR LOSS: 20,000
FIREFIGHTER RESPONSE: 31
MUTUAL AID: None Given