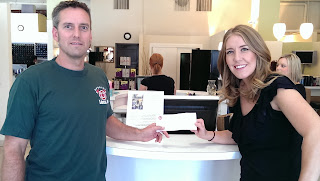 Thad Frater, Local 29 Secretary-Treasurer hands $500 check to Jaaz Salon. Jaaz Salon had been collecting donations for one of the families that had been burned out of their home during the three-house fire on Sherman and 19th last month. They had collected about $20 so far when it was stolen,  according to the Spokesman-Review article.
Posted by Bill Foss at 1:52 PM No comments:

One Spokane firefighter memorializes our fallen and another climbs in remembrance... 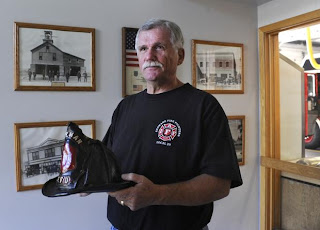 Narrative:
On Tuesday September 10,2013 at 09:59, 8 Companies of Spokane Firefighters, 5 engines, 2 Senior Ladders, 1 Heavy Rescue under the direction of Battalion Chiefs Donahoe and Moline responded to a reported commercial roof fire at E-Z Loader Trailer addressed North 717 Hamilton. The first arriving Chief arrived to find a large 1 story commercial building with a flat roof and light smoke showing out of an air handling unit. The building's responsible party reported everyone was out of the building. Companies were immediately assigned to locate and attack the fire from inside the warehouse while a ladder company placed their aerial ladder to the roof and ventilated the roof surrounding the air handling unit. The fire was quickly knocked down and lateral travel of the fire in the roof void was confined due to the quick actions of the Fire Department. No civilians or firefighters were injured as a result of the incident. The building was turned over to the owner after the termination of this incident.

Cause:
The fire is under investigation at this time by the Spokane Fire Department’s Special Investigation Unit.

Damage:
There was damage to the ceiling and roof surrounding the involved and now destroyed air handling unit.