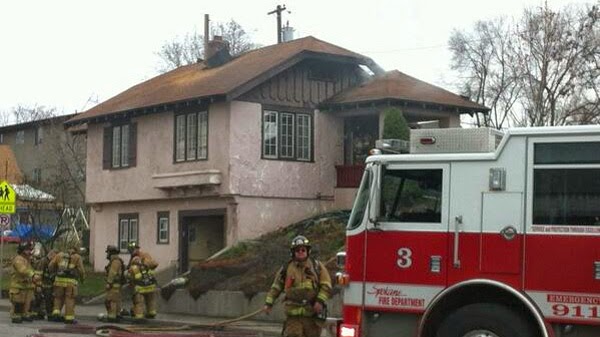 Incident #: 201416596
Date of Incident: 04/04/2014
Issuing Officer: BC Dave Haworth
Narrative: On Friday, April 4th, at approximately 10:00 AM, the Spokane Fire Department dispatched 4 engines,2 ladder trucks, 1 heavy rescue, and 2 battalion chiefs to a reported structure fire at 719 W Maxwell. The calling party had advised Fire Dispatch that his house was on fire and they advised him to evacuate and await the arrival of the fire department. SE3, responding from their station at Indiana and Ash, arrived within 4 minutes and reported smoke coming from the eaves of the two story wood structure. After talking with the occupant and making sure everyone had gotten out SE3 advanced a preconnected hose off of their apparatus to attack the fire, which was located mainly in the attic. As other crews arrived they were assigned other tasks such as securing a water supply, cutting a hole in the roof to let the smoke and fire escape the attic, and searching the structure to make sure all occupants were out. The fire was confined to the attic and crews had to pull the ceilings on the main floor to expose and extinguish it. There were no injuries to civilians and one firefighter was transported to SHMC with a shoulder injury. His status is unknown at the time of this media release. SPD provided traffic control by closing off Maxwell Ave and Avista assisted with utility control.
Cause: A SFD Investigator has determined that the fire was caused by smoking materials discarded into flower pot. The material in the pot caught fire and communicated up the inside of a porch column into the attic.
Damage: The roof and attic sustained heavy smoke and fire damage. Crews quickly covered the occupant's furnishings with tarps before pulling ceilings to prevent damage to them.
# Firefighters Responding: 24
Dollar Loss: $ 15000
Other Agencies Responding:
SPD, Avista